Top undead book Shadowed Demise has a new look. The dark and sexy cover introduces readers to the supernatural secrets hidden between the book's pages.

Available on Amazon and Kindle. 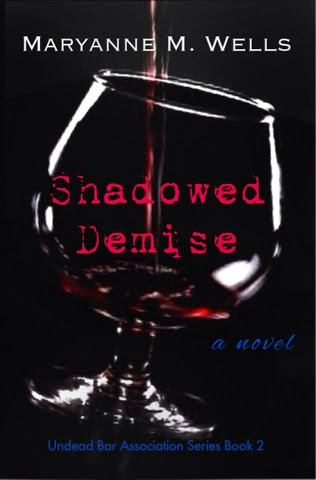 Summer begins, and law student Maryanne Wells flees to Dallas, Texas. She desperately wants to escape the memory of the terrible choice she made last year, when a clan of vampires branded Maryanne their newest human slave. Maryanne hopes she'll be safe working in a big city law firm, but the vampires are one step ahead of her. There's something they want Maryanne to find. Between the bright city lights, steamy jazz, and soaring glass towers, a dark secret waits. The secret's lingered for decades, ever since President John F. Kennedy was murdered on a Dallas street. Now it threatens to explode and rip the city apart. The vampires want Maryanne to capture the secret in their name, but if Maryanne can find strength to defy them, she will put the city's ghosts to rest and hold back the vampires' bloody power. Summer in Dallas brings a shattered heroine the chance to rescue a city and save her soul. As Book 2 of the Undead Bar Association series, Shadowed Demise fills the space between parts 1 and 2 of Book 1 - Matriculated Death, answering readers' burning questions about that fatal summer in Dallas.

Maryanne Mackenzie Wells is a Texas attorney turned fiction writer. She's the author of four active book series: The Undead Bar Association (supernatural suspense seasoned with history and a dash of law), Tales of My Mother Road (fairytales inspired by the states of Route 66), The Hearts Trilogy (sci-fi with a steampunk vibe), and Ghostly Mostly (young adult fiction from the Undead Bar Association realm). Her hallmarks are conducting meticulous research and crafting relatable and inspiring heroines. Maryanne believes in making every word count. If you like to skim, these books are NOT for you. When Maryanne's not busy researching or writing she's teaching, using her business and legal background to help future business leaders tackle the world. Occasionally, Maryanne shakes off her pen name to appear in a local theater production or ballet. Her last name, Wells, was inspired by her role in a local theatrical production of Dracula. Maryanne's drink of choice is coffee. www.maryannewells.com
Posted by Maryanne M. Wells at 5:21 PM