This is Part 19 of a Serial Story.  The story began here.

I have seen deserted buildings succumb to abandonment, a mantle of despair weighing down their shoulders while faded paint chips and falls at their feet. But the old Ag-Sciences building was different. It stood defiant, a gray silhouette that blocked out the sun and split the wind.
“Is evil here,” Absola said as we stared up at the building. I felt the same thing she did; it was as if some dark force inside the building had penetrated the walls and given the structure a new and threatening character. 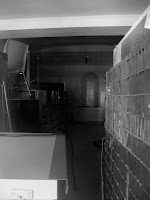 We climbed the stone steps to the front doors and looked inside. The doors were locked and the building dark. I cupped my hands around my eyes and peered into the darkness.

“The front entry is full of old office equipment and furniture. I don’t think we’ll have an easy time getting in.” I looked over at Absola and asked, “How did you get into the sepulchre at Cherry Hill?”

“Is entrance from ruins of old church. Much like churches in eastern Europe. Perhaps architect travel in Europe before coming here,” she mused.

Dang. “I was kind of hoping you had picked the lock,” I said.

Absola shook her head and said gravely, “Breaking into funeral home would be crime.”

“But you did break in. You broke in by using an entrance from a neighboring property.”

“Well, should be. Hidden doors in ruins of old churches are attractive and zombies are nuisance,” Absola pronounced.

“The very fact that you just said the door was hidden tells me no court would recognize it as an attractive nuisance! You went looking for the door. You…never mind. Let’s just drop it.” I sighed and looked at the locked doors before us. “I was hoping you had a lock picking kit,” I said.

“I do not. But would entrance to secret lab be so easy to find that one could walk through front door and see it?”

I thought about it. “There’s a greenhouse nearby. If I were a mad scientist specializing in plants I would want my lab situated near the greenhouse,” I said pensively.

“Is tunnel connecting building to greenhouse?”

“Could be. Like a maintenance tunnel or something.” I stepped back from the entrance and ran down the stairs. “Are you thinking what I’m thinking?” I called back to Absola.

“Basement,” I agreed. I looked around and spotted the edge of the greenhouse peeking out from behind the left side of the building. “This way,” I said, pointing. 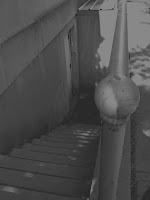 We rounded the north side of the building and saw the stairs immediately. I ran down them and tried the door. “Locked,” I said.

Absola pushed me aside and tried the door. “Is old lock,” she said. She stepped back and gave the door a powerful kick. The door flew open with a bang.

“By the way, this is also breaking and entering,” I said.

“Be grateful I find tool for opening locked door,” Absola said with a grin.

It was pitch black inside. The little bit of sunlight that crept in through the open door quickly lost its nerve and retreated. I ran my hand along the inside wall until I felt a light switch. I flicked it a few times; nothing happened. “The power’s out,” I said.

Absola pulled a flashlight from her pocket and flicked it on. The beam of light shone on empty filing cabinets and boxes full of dusty files. “How have lab if no electricity?” she whispered.

“There’s a faint smell of gasoline. Maybe Dr. S. had a generator set up.” We moved forward slowly, guided by Absola’s flashlight. “If there is a tunnel to the greenhouse it should be coming up on our right,” I whispered. “Wait, why are we both whispering?”

There was a loud crash on our right. We instinctively dropped to our knees and hid behind a pile of boxes. My heart was pounding in my ears and I dearly wanted to scream.

“Not one of your finest moments,” Absola whispered. I grimaced and said nothing.

The smell of gasoline grew stronger. There was a mechanized humming sound. Light filled the hallway just ahead on the right. We kept very still and waited.

So we waited a little longer. Still nothing.

I began to wonder how much time had passed. Was this one of those moments when you’re so tense that you think time is passing much more rapidly than it really is? Or was I so focused on what might be lurking in that hallway that my brain had already accounted for the typical reaction of overestimating time in tense situations and compensated for it, so that when I thought twenty minutes had passed I was actually correct.

Wait, twenty minutes? No, that can’t be right. I must be over exaggerating.

An anagram for ‘over exaggerating’ is ‘extra veggie groan.’

“I’m not hiding another second,” I whispered to Absola. “My brain is getting too loud and too weird.” I loaded shells into the shotgun and stepped away from the boxes.

“I know someone’s there,” I said. “Show yourself.” I moved around the boxes and looked into the bright hallway.

The long passage was clean and well maintained. The floors were polished, and the white paint on the walls looked fresh. At the far end of the hall was a narrow metal staircase. I could only see part of the staircase, but the placement and direction made it clear the stairs led up to the greenhouse.

An idea popped into my head – it might be Matt and Charlotte in the hallway. They were supposed to look for the lab after they looked for Herbert Shanks. Maybe they had arrived just before us, and found a way in through the greenhouse.

I took some tentative steps forward into the hallway, the shotgun ready to fire in case I needed it. I heard a shotgun pumped behind me and knew that Absola was preparing to follow.

Something big and sticky sprang out at me from a doorway. I swung the shotgun around, but it was knocked away. The thing slammed me into the wall. The sight of green skin, wild hair and pulsing red eyes registered in my brain. Then the zombie opened its mouth and all I could think about were the rows of sharp thorny teeth.