This is Part 1 of a Serial Story.

I could have made a snarky comment like, “I didn’t go to law school for three years and take the bar exam just so I could run errands for the firm. That’s what runners are for.” But I didn’t, for three reasons. First, I was alone in my car and I don’t believe in being snarky without an audience. Second, the atmosphere in the law firm had recently switched from bemusingly odd to downright weird and I was glad to get out for a while. Third, for the first time in years I was going to see Charlotte’s older brother Matt. Charlotte had been my best friend since childhood, and as long as she had been my friend her brother had been my nemesis.

His first name was Matthew, like his Dad, but he went by his middle name when we were kids - Dwayne. According to Charlotte her brother started going by Matt when he got out of the Army. Now he was apprenticed at a local funeral home, training to be a mortician.

I hadn’t seen Dwayne the Pain – whoops, I mean “Matt” – since high school. Even though he was older than me, Matt and I had been in a lot of the same classes. I’d been skipped ahead a lot. The other kids in school called me ‘Whiz Kid’ with nasty sneers. Matt had shortened the nickname to ‘Whiz,’ and he’d shown a bunch of our classmates a photograph of me as a toddler covered in artificial-cheese-from-a-can. I remembered too well the way everybody at school laughed when they saw that picture. And it was all Matt’s fault. He might be Matt to everyone else now, but he was still the Pain to me.

I pulled into the parking lot at Cherry Hill Funeral Home and climbed out of the car. I managed to open and shut all the necessary doors without dropping the box I needed to deliver. Not the sort of thing I’d normally brag about, but I was carrying my purse and a briefcase while wearing my tallest high heels and a tailored sheath dress. It was like successfully juggling three balls while wearing a strait jacket and balancing on stilts.

It was cool inside the funeral home and it smelled funny, like too many lilies. I paused for a moment and let my eyes adjust to the dim light.

“Hello,” said a masculine voice. “Can I help you?”

I turned around. Tall, broad shouldered, looking very sharp in a suit…could that be the Pain? Impossible. But he did have the same brown hair and eyes as Charlotte. If it was Matt, then Matt had grown up to be surprisingly good looking. Might even be great looking, if he didn’t have the facial expression of a deer caught in the headlights.

“Maryanne? Is that you?” he asked.

“Hi, Matt. My firm sent me over with some documents,” I said. What the heck was wrong with my voice? I cleared my throat.

“Wait, you’re a lawyer with that firm? Geez, Maryanne, it’s bad enough you sold your soul to get a law license. Do you have to work for the devil?”

Oh no he didn’t. “Just what is that supposed to mean?” I demanded. “I didn’t sell my soul.”

Matt pointed at the box I was holding and asked sharply, “What’s that?”

“You really expect me to believe that? Come on, Whiz, I know how ambitious you are. This is just the sort of case you’d jump on, hoping to make a name for yourself.”

I set the box down on a table and planted my hands on my hips. “Look here, Pain. I have nothing to do with any case connected to this place. I don’t know what the suit’s about. And I don’t care.” I pulled the receipt out of my briefcase and stuck it in Matt’s face. “Sign here saying you got the box,” I said.

Matt took the receipt from me and tossed it on top of the box. “Do you have any idea what your firm is doing to Shanks?” he asked.

“The guy who owns the restaurant in midtown?”

“No, Herbert Shanks, the funeral home director. He’s R. J. Shanks’ younger brother. Herbert had a nervous breakdown because of this lawsuit.”

Matt glared at me. He took a pen out of his jacket pocket, signed the receipt, and shoved it back at me. “Here’s your receipt. Go collect your thirty pieces of silver,” he said.

“I’m not betraying anyone,” I replied, exasperated. I turned on my heel and strode out of the building. “Noxious twit,” I muttered under my breath. 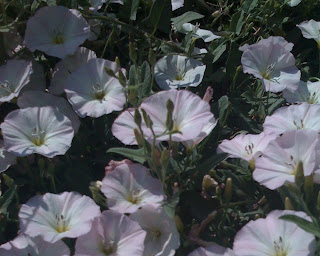 Maybe if I’d muttered less and looked more I would have seen the huge clump of flowering bindweed growing out onto the sidewalk. One of my heels caught in the tangled vine and I fell.

“Are you all right?”

I looked up to see Matt standing behind me.

“I’m fine,” I said, trying not to wince. Matt offered me his hand. I would have ignored it, but with those heels I needed some help.

I stood up, dusted off my dress and said, “Thanks.”

I pointed at the vine and said, “There’s the culprit.” Wait a minute. How had I avoided the vine on the way into the funeral home?

“Those weeds weren’t there this morning, I swear. Anyway, you should have looked where you were going,” Matt said. He glared at me like the fall was my fault.

Enough strange things have happened in my life that I pay attention. I don’t let little details trip me up. When Matt said the vine hadn’t been there that morning I believed him.  Why is it here now?

Eh.  It's not important.